Solar energy is "like believing in the Easter Bunny and the Tooth Fairy."
James Hansen climate scientist and prophet of climate change
Solar energy does not work at night or when it is cloudy.
The obvious
"I will not spend a single second debating the reality of climate change."
Governor of Nevada Steve Sisolak's statement of faith

Nevada's Governor Wants to Set An Example for China by
Covering the Desert with Useless Solar Energy
Norman Rogers (norm@climateviews.com)

Nevada's emissions of carbon dioxide contribute close to zero influence on the world's or Nevada's climate. The bulk of CO2 emissions are in Asia, particularly China.

I’m a climate skeptic. I spent a few years going to scientific meetings before I concluded that the looming climate catastrophe is dubious. Dubious science it may be, but for the climate scientists it is a stunning success, bringing money and status. Stunning success does not encourage self doubt.

The climate scare has captured the heart of governor Steve Sisolak. He is desperate to join with California in a  symbolic effort to change the Earth's climate. The citizens of Nevada will finance his very expensive show of concern.

According to global warming theory we have to reduce emissions of carbon dioxide (CO2) to avoid the predicted climate catastrophe. Most CO2 emissions come from burning fossil fuels derived from oil and coal.

Solar energy is not a good method of reducing CO2 emissions. Solar energy is expensive, but the worst thing about solar energy is that it is undependable. It doesn't work at night or when it is cloudy. As a consequence it can't replace the existing power plants that are mostly powered by natural gas in Nevada. Those plants have to be kept, staffed and ready to run, for those times when solar is not working.

The emissions of CO2 from Nevada are nothing compared to the gigantic emissions from Asia. What is going to be accomplished by turning the Nevada power grid upside down in an ineffective effort to reduce CO2 emissions? It is the equivalent of of attaching an outboard motor to a gigantic ship in order to make the ship go faster.

James Hansen is a very famous scientist and the most important promoter of the idea that we face a climate catastrophe. He has godlike status in the global warming believer’s community.  Hansen sees renewable energy (mainly solar in Nevada) as the equivalent of the “Easter Bunny and the Tooth Fairy.” The serious believers in global warming see nuclear energy as their salvation. Unlike solar or wind, nuclear is practical and does not emit the main greenhouse gas, carbon dioxide (CO2).

You can see a video of Dr. Hansen and activist Michael Shellenberger discussing nuclear here.

But nuclear has been made impracticable in the U.S. because the very environmental groups promoting global warming fight nuclear tooth, nail and lawsuit.

​Currently huge solar farms are in planning. For example, the Gemini project north of Las Vegas will cost, exclusive of subsidies, about $2 billion. This is paid for by electricity consumers and taxpayer subsidies. 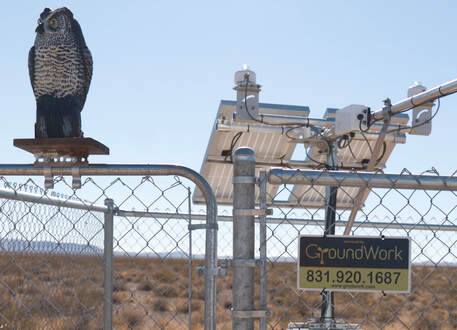 The electricity from a utility scale solar farm costs, exclusive of subsidies, around $80 per megawatt hour or 8 cents per kilowatt hour. The cost is mostly the initial construction cost spread over the life of the plant. Running the natural gas plants to generate electricity is much less expensive. The solar electricity can cost five or ten times more than than natural gas electricity. In 2019 solar was approximately 10% of Nevada electricity generation. Natural gas was almost 70%.

​In coming years, as solar electricity becomes a significant fraction of the supply, serious problems will arise. When there is a lot of solar energy, the governor's goal, there will be too much solar energy during the day. That energy has to be thrown away or stored in batteries until the evening. The batteries are extremely expensive. The battery system for the upcoming Gemini plant will cost $500 million. The batteries will have to be replaced a number of times as they wear out. That costs $300 million each time. See this video about the “duck curve,” another problem with excessive reliance on solar energy.

The administration of Nevada Democrat Governor Steve Sisolak released a “Climate Strategy” for the state in 2020.  The document panders to the two dominant interest groups, the crazy climate segment of the political left and the big money solar developers. The two groups have the same objective for different reasons. The crazy climate people are terrified of global warming and think that solar energy will save them. The big money climate people know that solar energy is very profitable, for them, not for the people of Nevada. 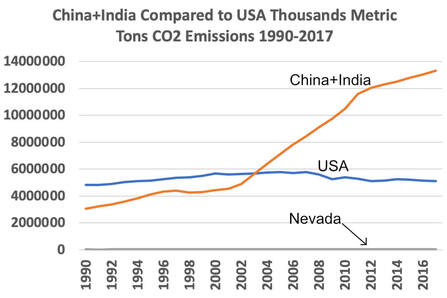 ​Here are some of the illogical ideas in the governor’s climate strategy:

1)The governor claims we have a climate problem. We have a desert and nothing much has changed.

2)The governor claims that spending billions on solar will save us from a catastrophe. But even if the climate catastrophe were real, the solar would be of no help because Nevada’s emissions are too tiny compared to the world’s emissions.
​
3)The governor advocates electric cars, but electric cars are a niche for wealthy people with short commutes.

Reducing CO2 emissions from Nevada will have approximately zero effect on Nevada’s or the world’s climate. CO2 is one of the things that happens in Las Vegas that does not stay in Las Vegas. The CO2 emitted in Nevada mixes within days throughout the world’s atmosphere.

The CO2 emissions from the USA have been declining due to substitution of natural gas for coal. The U.S. has huge reserves of natural gas that have been unlocked due to the fracking technique used in gas and oil wells. There is enough gas to last for at least a century, probably much longer.

Sometimes it is suggested that we should turn the U.S. economy upside down by implementing solar and wind energy to set a good example for China. The governor seems to think we should turn Nevada’s economy upside down to provide a good example for other states that don’t engage in radical climate foolishness. It may be that the governor is copying California, the capital of climate foolishness. That is ironic since Californians are constantly escaping to Nevada to get away from foolishness.

The solar industry, of course, makes political contributions to Nevada legislators. An interesting case is Chris Brooks, a state senator from district 3. Brooks was the driving force in the senate passing laws promoting solar energy. He is also in the solar energy business. At different times he has been a consultant for the Gemini project, the CEO of Bombard Renewable energy, and the founder of Las Vegas Solar Electric, LLC. One wonders if he is truly operating in the interest of the people that elected him, or in the interest of the people paying him.

You can learn more about solar energy on this Page. If that is not enough you can read my book Dumb Energy.